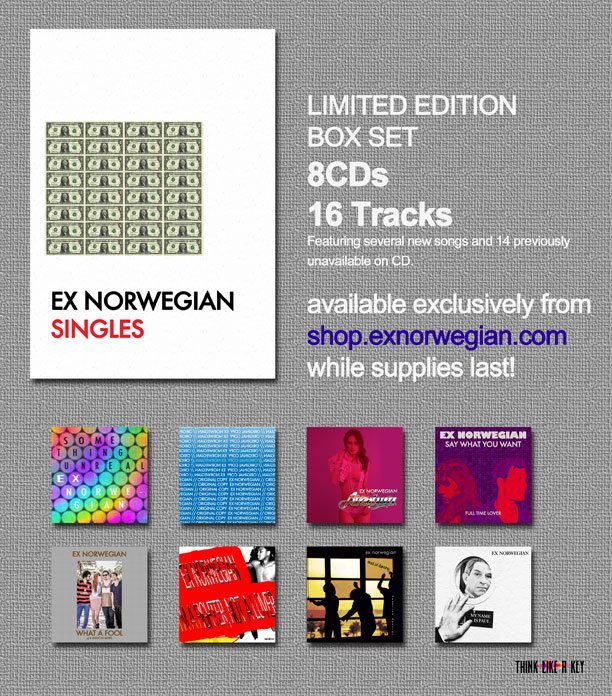 Limited to only 20 copies, this deluxe 8 cd set features 8 different A and B sides totaling 16 songs. It includes both singles released digitally this year, “Original Copy” and the remixed “Something Unreal” with their non-album B-sides. A further 6 singles are making their debut in this set in an unprecedented move by the band. A couple ‘oldies’ have been exhumed from the vaults – namely “Tired of Dancing” and “My Name Is Paul,” the latter featuring a slightly different mix. Of course “Tired of Dancing” is one of the two previously available on CD, albeit in the Dippy Records edition of Sketch – which itself was limited to 100 physical copies. The other rarity previously issued is “I’m A Fighter, Not A Lover” which appeared in the original limited edition copy of House Music in March 2012 as one of six bonus tracks. It is up for possible inclusion in next years full-length, as are the A-sides “What A Fool,” “Aventura,” and “Say What You Want” — all featured on this set. The B-sides are another story, showing some room for experimentation both sonically and in songwriting as well as a chance to release interesting covers. Most of these songs will remain exclusive to this set, at least in physical form. Digital singles are scheduled to appear throughout the following months.

The Singles box can be ordered exclusively at shop.exnorwegian.com. Currently retailing at $25, it makes a perfect holiday surprise for an self-proclaimed Ex Norwegian head.