On Thursday, April 15, 2010 @ 9PM South Florida’s indie rockers Ex Norwegian are hosting a concert event titled “Rock The FED Out” at Churchill’s, Miami’s premier space for live rock music to raise awareness about the Federal Reserve and the income tax. 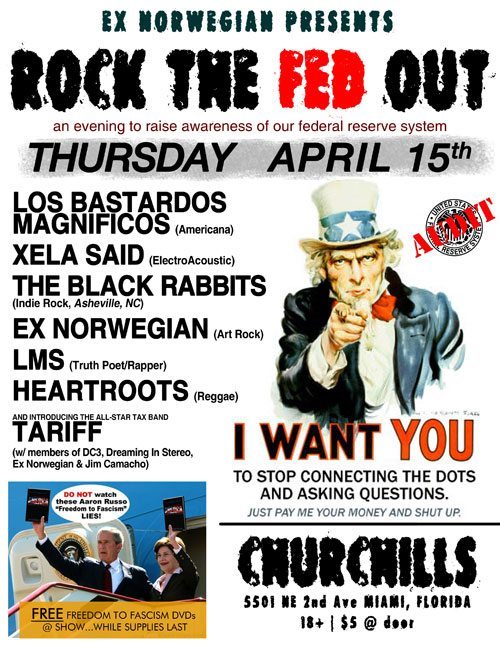 Admission for this show will be $5. Tickets are available here:http://www.showclix.com/event/9229. Free copies of Aaron Russo’s 2006 film America: Freedom to Fascism will be available. You must be 18 or older to attend. Churchills is located at 5501 North Miami Avenue, in Little Haiti. 305-757-1807.
In an effort to increase awareness, participation, and support for auditing the Federal Reserve, Ex Norwegian will perform at the event alongside Americana band Los Bastardos Magnificos, electroacoustic singer-songwriter Xela Said, truth poet/rapperLMS, reggae group Heartroots, The Black Rabbits from Asheville, NC and special one-off all-star group Tariff who will be performing classic tax songs such as “Taxman” by the Beatles. The band will include members of DC3, Dreaming In Stereo, Ex Norwegian &Jim Camacho band