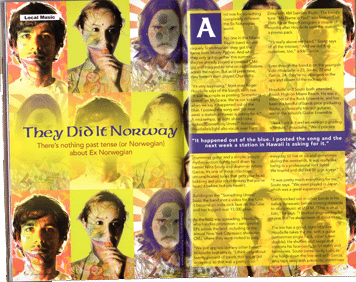 This month’s Closer magazine (Issue #55) features an article on Ex Norwegian titled “They Did It Norway”. Read it online @ http://closermagazine.com/new/index.php?section=display&feature=LocalMusic or pick up a copy where they are distributed.

And now for something completely different: the Ex Norwegian world.

No one in the Miami Beach band is even vaguely Scandinavian–they got the name from Monty Python. And while they only got together this summer, they’ve already played a coveted CMJ gig and snagged air time on radio stations across the nation. But as of press time, they haven’t even played Churchill’s.