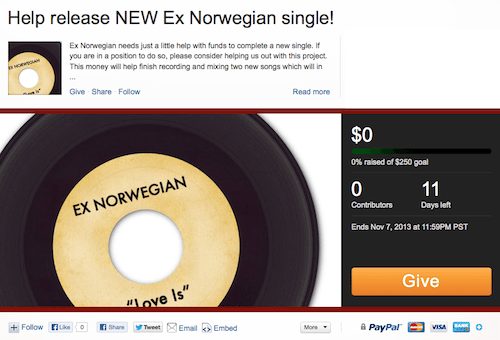 In a somewhat bizarre and atypical move, Ex Norwegian have been alerting their mailing list subscribers as well social media fans about a new single via crowdfunding site fundrzr.com. The catch is the single will only be released to those who help fund the mixing of it! Well, if you are intrigued and would like to learn more and possibly even contribute (as well as check out a sample clip), simply go to the fundraiser campaign page: https://fundrazr.com/campaigns/6d4O8/ab/c29ZP4

The new single will feature two brand new songs, “Love Is” and “First Time” and will introduce the groups new singer, Lucia Perez. It is also being produced by Roger Houdaille and Fernando Perdomo, the team behind the first Ex Norwegian single, “Something Unreal.”