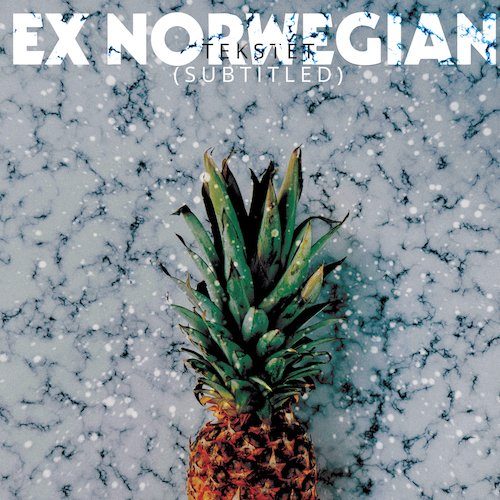 "...an eccentric but consistently enjoyable effort."

Produced and mixed by Roger Houdaille

Shindig!
Read More
Six albums [sic] into a career that’s brought them many admirers, and an underground hit in the shape of 2010’s Sketch, Miami-based Anglophiles Ex Norwegian (who, incidentally flinched their name from the Pythons’ parrot sketch) are still, frustratingly, underperforming. When they hit the spot - which they do frequently - they produce joyous pop laced with power chords and vocals that really hit the spot for anyone who’s into The Kinks, Beatles or Beach Boys. Written entirely by band founder and leader Roger Houdaille, Tekstet (which means subtitled in Norwegian) starts inspiringly enough with a clutch of spirited indie-prog stompers. Imagine Sonic Youth colliding with early Pink Floyd and you’ll be half way there. But half way through the album becomes bogged down in dreary fillers and rock cliches. Close but no Cuban cigar…for now at least.

babysue
Read More
Ex Norwegian is one of the most prolific Florida-based pop bands of the twenty-first century. But even more importantly, they're one of the most consistent in terms of quality and credibility. Although there are some continuous threads in the band's music, occasionally a release seems to come from a slightly different universe. Tekstet has a different overall sound and feel from previous Ex Norwegian albums. The main difference is that these tracks have a great deal in common with garage rock bands from the past and present (lots of reverb in the mix this time around). And true to the claim of the press release, the tracks are "...topped with a powerfully experimental production." But the songs still have those inviting catchy elements that Ex Norwegian fans have come to know and love. Ten groovy tracks that clock in at just over half an hour. This is a band that never disappoints. If you like artists on the Happy Happy Birthday To Me label, this album should appeal to you. Killer tracks include "Wasteland," "Dead Romance," and "It's All Panda." Top pick.

Broken Hearted Boy
Read More
The Miami-based Ex Norwegian shakes things up a bit on Tekstet (Subtitled), its third album in as many years, and eighth overall. The male-female vocal dynamic of singer-guitarist Roger Houdaille and singer Michelle Grand is mostly absent and some tracks have deliberately off-kilter arrangements. Still, Grand makes the most of her three songs and Houdaille layers his distinctive vocals within catchy arrangements that adroitly tap into power pop and various shades of 1960s rock.  “Any Old Time,” with its galloping bass and cartoon voices that drift in and out, is one of Houdaille’s more appealing adventures on this effort. “F’Nostalgia” starts slowly before evolving into a delirious swirl of keyboards, and “Whose Motion” also conjures psychedelic elements. “Gemmas” has a driving beat and an infectious melody that evokes Let’s Active and The dB’s.  Grand sings lead on Tekstet’s most energetic tracks, including the bass guitar propelled and defiant “Fearless.” She helps give “June Flakes” a buoyant, 1960s girl group sound that recalls the departed and still missed band The Like, and is also impressive with the catchy retro pop of “O Simone.” It would be nice to find Grand and Houdaille singing as a team again on the next (2018?) release, but in the meantime, Tekstet is an eccentric but consistently enjoyable effort.
Previous
Next

Copyright 2023 © All rights Reserved. Think Like A Key LLC