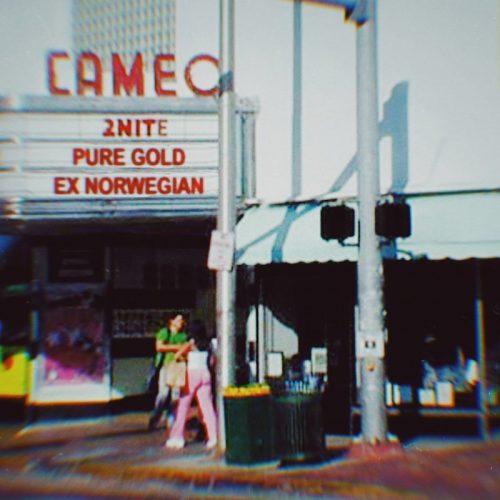 Shindig!
Read More
Florida quartet Ex Norwegian’s only brush with this writer was via their 2012 recording of The Mirage’s Brit-psych monster, ‘Ebenezer Beaver’, so to discover that Pure Gold is their sixth album is something of a surprise. Their affiliation with Fruits de Mer Records is writ large in the six covers that dominate this record, with the opening ‘It’s A Game’ (originally by String Driven Thing but a hit for The Bay City Rollers in 1977) demonstrating a firm grasp of crunchy, guitar-led power pop and male-female vocal interplay. That they have been issued before matters little. A rockin’ take on Tintern Abbey’s ‘Beeside’ confirms these psychedelic credentials beyond doubt, while Paul McCartney’s ’83 album track, ‘Keep Under Cover’, and Jimmy Campbell’s uber-obscure ‘Close My Case And Move On’ demonstrate both impeccable taste and inspired eclecticism. The group originals walk a path between Blondie-esque indie-rock and retro-slacker guitar slinging but a tasty chorus or nagging hook is never too far away. Not perfect, but an interesting and diverse set nonetheless.

babysue
Read More
We should probably begin here by saying that this album features the 2012 line-up of Ex Norwegian which was/is Roger Houdaille (vocals, guitar), Michelle Grand (vocals, percussion), Giuseppe Rodriguez (vocals, bass), and Lucas Queiroz (vocals, guitar). And playing drums on the album is guitarist Fernando Perdomo (who is also a solo artist). Unlike previous releases Pure Gold is, for the most part, a cover album featuring interpretations of songs recorded by The Shirts, Melanie, String Driven Thing, Bay City Rollers and more. That said, this is a different sort of cover album because the band opted to choose tunes that aren't so well known. So instead of hearing tunes you've heard way too many times, you hear versions of songs you've likely never heard before at all...combined with some brand new Ex Norwegian songs that you've definitely never heard before. We've been big fans of this band for years. We're pleased to report that this is (not surprisingly) another direct hit. We love hearing this line-up playing together again...everyone seems to naturally fall into a groove together and the music is pure magic. We received a CD-R but, at least for the time being, Pure Gold is being offered exclusively as a download on Bandcamp...so click HERE to get yours now. Another truly great album from a truly great band. Top pick.

Broken Hearted Boy
Read More
Singer-guitarist Roger Houdaille formed Ex Norwegian in 2008 and the band has established a loyal following through various incarnations between Miami and New York over the years. Its song "It's A Game," originally done by String Driven Thing (but a bigger hit for The Bay City Rollers), was recently released as part of a split single with the European band Permanent Clear Light on Fruits de Mer. That's a badge of honor for those of us who are well-acquainted with the vinyl-only UK label's high standards for garage, psychedelic, and prog music. Having endured various band breakups and even some recent health issues, it's all the more impressive that Houdaille was able to record the consistently top notch Pure Gold with his current Ex Norwegian lineup of vocalist Michelle Grand, guitarist Lucas Queiroz, bassist Guiseppe Rodriguez, and drummer Fernando Perdomo. The new album is available for pre-order on Bandcamp and will be released on December 11 in special autographed and deluxe bonus disc CD-R editions. All proceeds will go toward helping pay Houdaille's medical bills. Ex Norwegian taps into power pop, psychedelic, and indie rock on this melodic collection of originals and deep covers of songs by Paul McCartney, Melanie, The Shirts, and others. The previously mentioned first single "It's A Game" maintains the quirky charm of the original while establishing the essential role Houdaille and Grand's harmonies will play on Pure Gold. Their vocal interplay is more adventurous on "Cyclone" and "On The Sidelines," energetic songs that call to mind bands like Trona, Game Theory, and Let's Active. "Keep Under Cover" is light and whimsical while the title track features some slinky bass playing from Rodriguez. "Shadow Ships," fueled by guitarists Houdaille and Queiroz, exudes the power of catching Ex Norwegian in a local club.

The Ringmaster Review
Read More
There is always a sense of anticipation and indeed excitement when faced with a new release from US band Ex Norwegian, but in approaching their new album Pure Gold, there was a heavier sense of intrigue involved too. It was the first encounter since the serious illness which band founder Roger Houdaille suffered, the proceeds from the album going towards the emergency hospital bills incurred, and brings a collection of re-interpretations of tracks by other artists alongside original compositions from a new line-up to that which created the acclaimed and outstanding Wasted Lines album of 2014. So there was a wondering if the release was merely a filler in the future of the band but fair to say and straight away ears and imagination were alive whilst being immersed in the recognisable but ever unpredictable Ex Norwegian pop/indie rock sound, and the diversity of flavour that breeds to show it was anything but. The creative union of Houdaille (vocals, guitars, keyboards, percussion), Giuseppe Rodriguez (vocals, bass, moog), Lucas Queiroz (vocals, guitars), Fernando Perdomo (drums, slide guitar), and Michelle Grand (vocals), with occasional guest organ prowess from Chris Price, tempt and grip ears straight away with album opener It’s A Game. A String Driven Thing song arguably made more famous by The Bay City Rollers, it quickly has feet in an eager shuffle and appetite licking lips with its catchy pop rock stroll. Ex Norwegian cast a vibrant energy to the song without losing its folkish charm whilst the great blend of vocals between Houdaille and Grand is almost flirtatious in its persuasion. There is also an Abba-esque hue to the great start to the release, though the fade-out is a touch annoying just to be picky. Asking Too Much steps forward next and just as easily has attention enthralled with its melodic caresses and infectious persuasion as a healthy scent of Kirsty MacColl like folk pop flavours it. As the first, the song has a simplicity which is as inviting and enjoyable as the nuances and melodic enterprise the band inject into its design, the result another lively excuse to romp; a similar invitation given again by the feisty rock infused Beeside, a Tintern Abbey song. Sultry air and fuzzy breath soaks the song to great effect, whilst its psych rock character becomes increasingly compelling with each passing second and smouldering melody. Already it is fair to say highlights are the order of the day so far, another provided straight away by the band’s impressive cover of the Melanie song Cyclone. Providing an inflamed melodic roar led by the superb tones of Grand, her harmonic expressive serenading ears as potently as the fiery side to her great voice, the track swiftly gets under the skin. It’s successor, the boisterous and show stealer On The Sidelines, is a match in such invasive potency, it playing like a feisty Martha and the Muffins but creating its own unique personality with every swinging rhythms, melodic temptation, and gripping hook. For us every Ex Norwegian album seems to have one song which especially hits the sweet spot, On The Sidelines that irresistible offering within Pure Gold. A new wave essence fuels the following Other Half, a touch of Graham Parker to the song lighting up ears with a nostalgic bluesy air whilst the Paul McCartney track Keep Under Cover is given a virulent tonic of adventurous infectiousness and quite simply a tenacious fresh breath. Both tracks again leave body and emotions smiling and greedy for more, the album’s title track eager to satisfy with its mix of dark funky basslines, surf harmonies, and romancing melodic seduction. There is a less dramatic feel to the song compared to other tracks but with keys an emotive haze around the contagious lure of the bass and the lacing of spicy blues guitar, it is a robustly catchy proposal very easy to get fully involved with. A fine take on the Jimmy Campbell song Close My Case And Move On comes next, Ex Norwegian accentuating its emotive heart and intimacy with a sturdier frame and tangy country rock colouring. A fascinating canter of a song with an element of pleasing discord to its nature too, it is maybe not as immediately impacting in comparison to the more boisterous approaches of other tracks within the album, but it matches all in persuasion before Shadow Ships and a version of Tell Me Your Plans by The Shirts brings things to an enjoyable close. The first of the pair merges Americana with sixties pop vibrancy, creating a richly satisfying if not fevered incitement; Tell Me Your Plans providing that with its again sixties hued interpretation of a great power pop offering. From start to finish Pure Gold is a thoroughly engaging and highly enjoyable romp. It might not quite match the triumphant majesty of the band’s last album yet it is a different kind of proposition. For pleasure though, it is a rivalling success and reason enough to suggest Ex Norwegian is one of our brightest pop rock bands.

Our Stage
Read More
From New York by way of Miami Beach, the simply excellent pop/rock group Ex Norwegian have dropped their newest LP Pure Gold. The full album stream is currently on YouTube and you can listen to it below. As you’re about to hear, the band is saving ‘alternative’ guitar rock for the new millennium (is this millennium still new?), dressing up, for example, solos reminiscent of Matthew Sweet and garage-y Pixies riffs with sharp indie pop production. On top of it all are super-hooky songs and the irresistible harmonies / alternating lead vocals of Roger Houdaille and Michelle Grand.

Powerpopaholic
Read More
Roger Houdaille is a genuine pop savant, and after a near death experience, he took to the studio with his band Ex-Norwegian to work on his 6th album. Classic influences are all here; the Beatles, the Kinks, Bowie and the Move. Notable guest stars are Fernando Perdomo on slide guitar and Chris Price on organ. What you end up with is pure rock and roll bliss. “It’s A Game” has those beats, but also got strong melodies and the guitars are everywhere. And the follow-up “Asking Too Much” has thick glam riffs across a chorus of Roger and Michelle Grand’s vocals. “Beeside” is another gem with slower droning rhythm and the frantic chords and beat of “On The Sidelines” is a little Ramones and Blondie combined. Each track carries a stylistic shift, “Keep Under Cover” is brilliant lyrical twist which asks “What good is art when it hurts your head?” It stays unpredictable throughout, and each track is compelling. This is the best Ex-Norwegian album in a while and earns a spot on my top ten list this year. Yes it’s “Pure Gold,” Roger!
Previous
Next

Copyright 2023 © All rights Reserved. Think Like A Key LLC