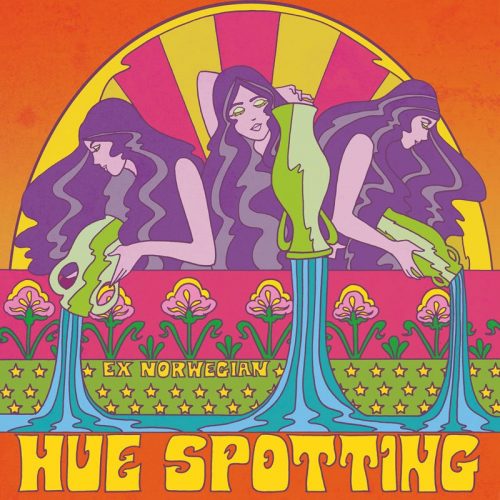 “merely confirms their command of the art..."

R2RNick West
Read More
The recent Something Unreal collection chronicled the creative adventures of these Florida-based underground popsters and driving spirit, Roger Houdaille. It indicated an easy familiarity with the many shades of power pop, and an adeptness at revitalising them. This was equally apparent in a cluster of covers of late-60s psych classics, among them The Mirage's 'Ebanezer Beaver', to be found on the bonus disc.
Houdaille, it transpired, is a big fan of vintage psych-pop, with a copy of The Tapestry of Delights to prove it. In the past he's provided recordings for Fruits de Mer, and regularly posted tracks on his website; recently compiuled on the briefly available The Popsike Tryps Of Ex Norwegian. Now come two complimentary collections allowing this enthusiasm free rein. Hue Spotting comprises eight new songs and two reworkings, while Spotting Hues presents a further selection of rediscoveries.
The band personnel, reduced to the duo of Houdaille and Fernando Perdomo, fired tracks back and forth between Florida and California, contriving a richly nuanced, diverse, musical cache - exciting, declamatory psychedelia, virtually whimsy-free, with a creative headiness, and a busy but never cluttered sound.
Signature 'Something Unreal' becomes 'Something 2020', familiar yet fresh-minted. Echoes of early Soft Machine resound in 'Hue Spotter' and solo Syd in the eight-minutes-plus frenzy of 'Not Underground'. The infectious, addictive quality persists through Spotting Hues where selections from the near-forgotten July, and The End, rub shoulders with The Nice and Gene Clark, crowned with a bravely fresh perspective on Nick Garrie's timeless 'Stanislas'.

Shindig!Andy Morten
Read More
Since debuting in 2009 with Standby, Roger Houdaille's amorphous indie-pop aggregation has carved out an enviable niche for itself across nine albums and about a million singles of intelligent, deconstructed guitar music that owes as much to Guided By Voices and The Stranglers as it does their beloved Beatles and Beach Boys.
Hue Spotting, album #10, merely confirms their command of the art without too much deviation from the format. The atonal indie-rock riffs are still here, powering the likes of 'Comfort Sands' and 'Post Post Malone', while 'Bloody Parrots!' (another Monty Python nod?) could have come from Trevor Horn's Buggles era. Oh, and anyone that names a song 'Hue Hopper' is alright by us. Acting as something of a bridge between these two new releases is the eight-minute 'Not Underground', a guitar-heavy krautpop wig-flipper that manages to get seriously far out.
The complementary Spotting Hues, delivered with preternatural timing as we enjoy this issue's colourful theme, finds the Norwegians tackling an array of (predominantly) British '60s psych confections with the kind of brash confidence only super-fans could bring to such a jolly jape. Where most nbands would faint at the prospect of approaching the likes of July's 'Hallo To Me', Apple's 'Buffalo Billycan', The End's 'Cardboard Watch' and Billy Nicholls' 'Girl From New York' at any angle other than one of distant reverence, Roger and crew dive right in, getting their faces filthy and giving their Anglophile Tendencies a ruddy good airing.
Covers albums are divisive beasts and while the contemporary sound palette may be a little unflattering in places (Fairfield Parlour's 'Baby Stay For Tonight' is a little - ahem - goth-y, but hey, we don't all have access to analogue studios and Steve Howe's actual 1967 wah-wah pedal), these gues are the perfect match for their self-penned cousins as spotted earlier.
This listener can only hope that with album #12 (due next year in an ideal world) Ex Norwegian broaden their vision to truly widescreen proportions and let the whole bloody world in.

ExposéHenry Schneider
Read More
On June 5 this year neo-psych band Ex Norwegian released two albums: Hue Spotting containing ten original tunes by Ex Norwegian founder Roger Houdalle and Spotting Hues, a collection of cover tunes from the likes of July, Dr. Strangely Strange, The Nice, etc. If you’ve been following Exposé over the years, you will know that Ex Norwegian is also one of the many bands that regularly appears on Fruits der Mer Records releases. One of the cool things about these two new albums is the Peter Max inspired artwork. The other of course is the music. Hue Spotting sports ten neo-psych pop songs that have roots firmly in the 60s. Trippiness abounds with heavy organ, processed vocals, reversed tapes, and shimmering guitars. Personal favorites include “Bloody Parrots!,” “Your Turn Papers Colour,” and the eight minute “Not Underground.” But where the band really excels is on Spotting Hues with its eleven cover tunes, coherent sound, and taking ownership of the music. The album opens with a cover of July’s “Hallo to Me” that sounds more like The Pretty Things or early The Who. Next is a cover of “Buffalo Billycan” by the obscure band Apple that also resembles The Pretty Things. The third track is a cover Dr. Strangely Strange’s “Jove Was at Home” which also resembles The Pretty Things more than the fae Doctor. The fourth track is “Happily Unemployed,” a cover of the Gruppo Sportivo hit. Then we come to a superb cover of The Nice’s “The Cry of Eugene,” so much so that you aren’t even comparing it to Keith Emerson! The sixth track is a Kaleidosope tune “Baby Stay for the Night,” which made me think of the Jay and the Americans’ hit “Come a Little Bit Closer.” Next in line is a cover of The End’s “Cardboard Watch” followed by a hard rocking cover of The West Coast Pop Art Experimental Band’s “Until the Poorest of People Have Money to Spend.” The ninth track is a cover of another obscure artist, Billy Nicolls, and his pop-psych love song “Girl from New York.” This is followed by a cover of another obscure artist, Nick Garrie, and his trippy psych ballad “The Nightmare of J.B. Stanislas,” which made me think of The Kinks’ “Waterloo Sunset.” And the album closes with a cover of Gene Clark’s “Lady of the North” that brings Ex-Norwegian’s sound back to The Pretty Things and S. F. Sorrow. Considering Spotting Hues, I would not be surprised to learn that this album was inspired by Keith Jones of Fruits de Mer.

ExposéJon Davis
Read More
Ex Norwegian is a band that has touched on a number of styles during its more than ten years of existence, and with Hue Spotting, they are in full-on neo-psychedelic mode, presenting a tasty set of ten trippy melodic tunes that pay close attention to the classics of the late 60s while maintaining a fresh sound. Right off the bat, “Fear Backwards” gives us a driving drum beat, twanging guitars, and vocals treated with a phase shift, not to mention Mellotron-like keyboards. There are some more modern keyboard sounds as well, but they don’t detract from the psychedelic mood. The style called power pop that emerged in the 70s could be seen as a development from 60s psychedelic rock, and Ex Norwegian blends the two seamlessly on songs like “Comfort Sands,” which has a charming melody played on a melodica in several sections. Every song is fun, full of great melodies, interesting arrangements, and solid playing. In keeping with the standards of the psychedelic era, there’s even one tune featuring an extended guitar solo, with echoes and wah-wah in evidence. Anyone who enjoys upbeat rock music should enjoy this album even if Nazz and the Strawberry Alarm Clock aren’t on their radar.
As a companion to Hue Spotting, Ex Norwegian also has Spotting Hues, an album full of covers of actual vintage tunes, mostly pretty obscure ones. From the 60s, we get tracks from July, Apple, The Nice, The End, West Coast Pop Art Experimental Band, Billy Nicholls, and Nick Garrie; the 70s are represented by Fairfield Parlour and Gene Clark; and then there’s a version of “Happily Unemployed,” a 1982 song by Gruppo Sportivo that’s done as if it had been from the 60s instead of ska-inflected New Wave. All are worthy, and several may in fact be the first times these songs have ever been covered — it’s not as if there are many people who have heard the source material, let alone learned how to play them. The Nice’s “Cry of Eugene” is especially fun, and certainly has better vocals than the original. On a musical level, this album of covers is every bit as enjoyable as its companion of originals, and could even serve as a jumping of point to explore some super-obscure corners of music history. I’d recommend Hue Spotting as the main dish, with Spotting Hues if you have room for dessert.

PowerpopaholicAaron Kupferberg
Read More
Ex Norwegian chugs along with their 10th studio album “Hue Spotting.” Like the cover design suggests, its a modern psyche-pop collection that utilizes synth beats, echoing guitars and Mellotron keys. Starting with “Fear Backwards” it’s driven by a solid rhythm and lead singer Roger Houdaille’s layered vocals. “Comfort Sands” incorporates these older influences (Farfisa organ, sitar) with modern guitar and bass structures to create something unique. “Bloody Parrots!” is another standout with its warbling vocal about an occult crime scene over an organ solo. It can stray into some quite trippy moments that bring to mind Pink Floyd, Spaceman 3, and The Resonars. But there are still great hooks here, as evidenced on both “Something” and the amusing gem “Post Post Malone.”
As a bonus, Roger also released “Spotting Hues,” an album that covers rare nuggets from the psychedelic era. Songs from The Nice, The End, West Coast Pop Art Experimental Band, Billy Nicholls, and more. Many of these songs are so obscure, for most it will be like “brand new” material, making it a perfect companion album to the originals. Both are highly recommended.

Gig SlutzMatt Mead
Read More
The indulgent sounds of Ex Norwegian make their lively return with their 10thstudio album release Hue Spotting let loose on June 5thvia Beyond Before records. Essentially the collection is a blitz of electronic psychedelic spaced out compositions the sort of music Tame Impala have creating to wider acclaim, I think it’s time Ex Norwegian shoulder charged their way into this spotlight for a piece of the action. Fear Backwards opens the doors with a stream of pop phased guitars with a tinkling of the ivories over a charging beat, this sort of opening will only mean 1 thing, more excitement is yet to come.
Comfort Sands has a melodica opening before the whole band come crashing into view in a Revolution type structure, Hue Spotting delves deep into a Deep Purple type organ driven frenzy, Bloody Parrots isn’t an irritating repeating vocal exercise rather bubbling vocals ride over a bouncing beat, You Turn Papers Colour goes straight into a Pink Floyd slowed down churning hypnotic ballad, similar to Comfortably Numb.
Something 2020 beams into the same addictive revolving beat made successful through Kevin Parker. The epic 8 plus minutes of Not Underground is an exercise in successful psych feedback repeating chorus that has been a fan favourite with Spacemen 3,My Bloody Valentine and Jesus and the Mary Chain. Night Is Long delves the listener once again into a popular electric beat shuffle, with a catchy chorus breathing the same fluidity such as World Of Twist, this brill release by Ex Norwegian is a fab way to bring in the tin anniversary.
Previous
Next